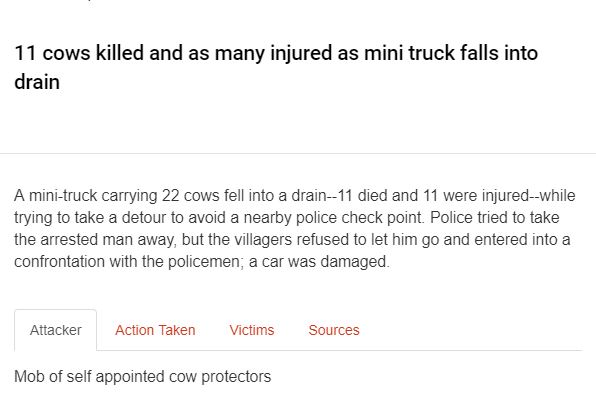 According to the report based on which it was included in the database, four smugglers were traveling in the vehicle, and when police arrived at the accident spot they arrested one person, but other three smugglers had already fled the scene. The report says that villagers in the area tried to prevent police from taking the arrested, but it does not say anything about the smugglers being attacked or the police being attacked on the other hand police has mentioned that none of the police members suffered from injury however the same is not mentioned by IndiaSpend and the person being arrested on charges of cow smuggling

Villagers entered into a confrontation with the police after 11 cows were killed and as many injured when a mini-truck, which was carrying the bovines, overturned and fell into a nullah in Firozabad late Wednesday. According to Report cows were being illegally trafficked from Badaun. “They were being taken to Kanpur. The arrested person, Shadab, is a resident of Badaun. The three others with him are also from Badaun,”