IndiaSpend has not mentioned about the about cow slaughtered instead have mentioned a bovine animal had been slaughtered. On the other hand, police recovered “heaps of bovine meat and heads of cows from Rahman’s residence"

The government has issued a notice on the prohibition on slaughtering bovine animals in the state under various laws. It also warned offenders of dire legal consequences. The Prevention of Cow Slaughter Act prohibits slaughter or sacrifice of cows and calves.

It seems that IndiaSpend did not want to show that Rahman Mian has broken any law. 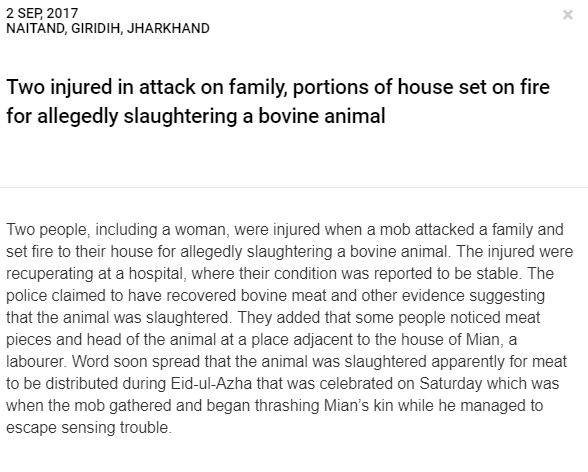 Mob set ablaze a Muslim man's house who slaughtered cows on Eid ul-Adha in Jharkhand’s Giridh district. Cops from the local police station doused the fire and sought reinforcement from the district police.

Rahman had slaughtered three cows in the morning near his residence for distribution among the local members of the Muslim community, police said. Police also recovered “heaps of bovine meat and heads of cows from Rahman’s residence”.